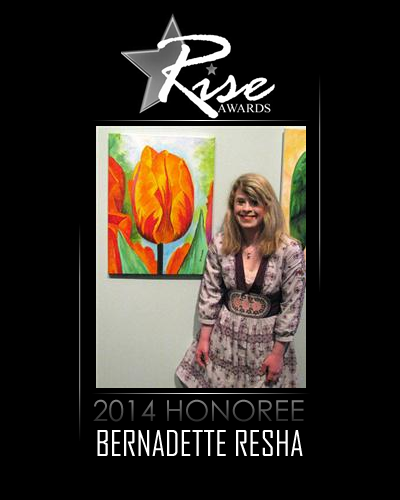 Born in Nashville TN with Down syndrome, Bernadette Resha has become well known worldwide within the art community. Her exposure to the art world and culture started as a child attending as many art galleries, museums, concert halls and plays as her time would allow.  From an early age, she was encouraged to draw and color in her own style as a form of expression and therapy. The result is a body of work which documents an artist developing a unique style that is entirely her own.     With an artist grandmother and a mother fully committed to allowing her to use this medium of self-expression for as far as she would care to take it, Bernadette now exhibits in numerous art galleries, art and craft shows throughout south east and attends many conventions throughout the United States showing and selling her work.  Art is such an integral part of Bernadette’s life that if her paints were taken away, she would still sit for hours drawing.