INNERview: Mommy, I Wish I Could Tell You [HYH] 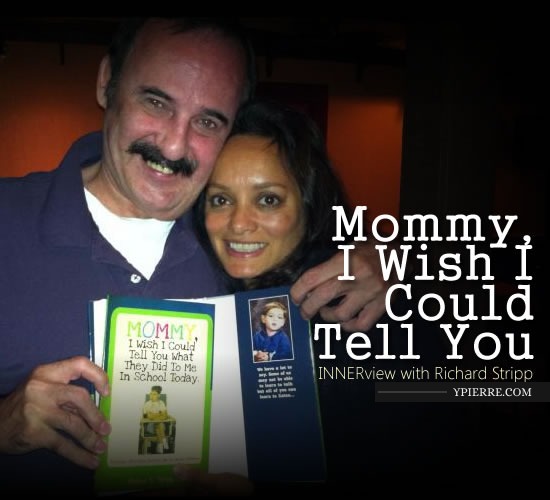 Mommy, I Wish I Could Tell You

For his entire life, the man affectionately known as “Mr. Rick” has been selflessly giving his all to help others.  His empathy, understanding, and compassion have combined with his natural ability to make people smile to form the perfect mix of tools for him to use toward his goal of making this world a better place.  He has endured many hardships in his life, and while some might use them as a crutch, Mr. Rick has used them as motivation.  Over the last decade, Mr. Rick has turned his efforts toward helping children with disabilities.  After many years, he is now writing this emotional and educational book in an attempt to use his experiences as both a precautionary tale and a guideline for the future.  “Mommy, I Wish I Could Tell You What They Did to Me in School Today” has enabled Mr. Rick to become a voice for the voiceless.  He has already touched, changed, and helped so many lives; through this book, he hopes to continue to do so.

YVONNE PIERRE:  In summary, what is your book, “Mommy, I wish I could tell you what they did to me in school today” about?

RICHARD STRIPP:  I think my son, Rick, Jr., who wrote the synopsis that appears on the back cover of the book answers this question best. He summarized the book this way: “Mommy, I Wish I Could Tell You What They Did To Me In School Today” is a glimpse into the minds of 10 different children with varying disabilities through the eyes of one of their closest friends.  The author has worked directly with these children and because most of them can’t speak for themselves, he has given us an idea of what they might possibly say.  All of the scenarios discussed in this book are based on actual events.  While some of it may be disturbing, the hope is that the reader will learn what can occur in an effort to make things better in the future.  This one-of-a-kind book is a must-read for anyone socially, emotionally, or professionally linked to any special needs person.

YVONNE:  How did the idea to write this book come to you?

RICHARD:  After nearly a decade of working in schools that service special needs children and witnessing and reporting far too many cases of bullying, abuse and neglect at the hands of staff, I felt this book was a necessity. Non-verbal students seemed to be targeted more often than the individuals who could speak.

Reporting these atrocities to both school administrators and to state authorities didn’t prevent them from re-occurring. Many parents were completely unaware of what was happening to their children while at school.  I felt it was necessary for someone to speak for those who couldn’t speak for themselves. In the book, I attempt to pull away the veil of secrecy that surrounds far too many classrooms. The public must be made aware of what can and does happen to these innocent children. More must be done to protect them.

YVONNE:  There are ten characters in the book. What are the diagnoses of these characters?

RICHARD:  The ten children characters that are portrayed in this book are based on students that I have interacted with and/or worked with directly.  The majority of them attended a school that serviced students with varying disabilities.  Some of the children had multiple diagnoses.  I worked with students with developmental delays, both physical and cognitive, autism, cerebral palsy, Down syndrome, angelman syndrome, PANDAS, mitochondrial disease, epilepsy, spina bifida, and numerous other medical conditions.

YVONNE:  The children in the book are nonverbal, but you write from their thoughts.  How were you able to connect to the characters in order to write their stories?

RICHARD:  The majority of children who “speak” in this book are non-verbal.  Their words which you read are fictitious and were never spoken by them, but are based on actual events that occurred in their lives.  It is my belief that if the non-verbal children in this book could speak, what you read is what they might have said.  I attempted to put myself in “their shoes” and see the world through their eyes.  Also, having had epilepsy as a child and having experienced numerous seizures, I believe that I can relate to some of these children in a small way.

Many years ago, I had the honor and privilege of working with a young man with cerebral that was confined to a wheelchair. Although it was difficult for him to communicate verbally, he was able to do so.  He shared with me many of his personal feelings, including things that bothered him in regards to how he was treated by others.  As with all of the special needs children that I have worked with, I learned a lot from him.  I have been able to apply this knowledge while working with and assisting others.

YVONNE:  How has writing this book impacted your life on a personal level?

RICHARD:  Writing this book was difficult for me in many ways. I have struggled with dyslexia and ADD for the majority of my life so just the “act” of sitting down and writing a chapter wasn’t easy. It was also emotionally draining re-living many of the horrible things that I witnessed, knowing that so many children still endure these hardships every day. There are folks who I thought were my friends in the field of education that have distanced themselves from me since the book has been released. That being said, knowing that the writing of this book could possibly lead to changes being made is certainly a feeling of accomplishment.

Writing the book has impacted my life on a personal level in many ways.  There have been numerous parents of children with special needs that have contacted me and stated that by reading the book they have changed the way in which they interact with their own children in a positive way because they understand them better. Parents who I have never meet before often reach out to me for advice and seeking answers in regards to problems their children may be encountering while at school. Some parents just want to share stories of the atrocities that their own children have faced.

I spend an enormous amount of time trying to promote the books’ very important message.

YVONNE:  What is the core message you hope readers walk away with after reading your book?

RICHARD:  I want people to know what can and do happen to special needs children while at school. Parents of special needs children should be able to send their loved ones to school thinking that their child will be safe, educated and cared for by individuals that are adequately trained and willing to always do their jobs in an appropriate manner. Unfortunately, that is not always the case.

Also, as I state in the book, it’s important to remember that the majority of people that work with special needs children in our schools are very dedicated and caring.

Most importantly, I want people to know that changes can and must be made that will insure that these innocent children are kept safe while they are at school and treated with the dignity and respect that they deserve.  There is a chapter in the book, “So, what can be done?” that deals with this issue.

Change for the better won’t happen if folks don’t know that a problem exists.

People must speak up for those who can’t speak for themselves. On a page in the book prior to the first chapter, I quote Dr. Martin Luther King:

“Never, never be afraid to do what’s right, especially if the well-being of a person or animal is at stake. Society’s punishments are small compared to the wounds we inflict on our soul when we look the other way.”

YVONNE:  How can HYH readers get a copy of the book?

YVONNE:  Where can people go to find out more information?

RICHARD:  All of the parents of special needs children are blessed to have the children that they do. The book is dedicated to Noah Varcadipane, a young man that left this world at the age of thirteen after struggling many years with the effects of mitochondrial disease.  I would like to leave everyone with two excerpts from the last chapter of the book in which Noah says his final good-bye. “Me and all my special needs friends don’t want to be treated special.  We just want to be treated like any other kid.  When you encounter a special needs child, such as me, who is non-verbal, that doesn’t mean he or she can’t communicate with you.  You use words and language, we use other things.  If you try real hard, you’ll be able to figure out what we’re “saying” and how we’re saying it.  All I’m asking is that you try.  We have a lot to say.  Some of us may not be able to learn to talk but all of you can learn to listen, even if that involves something other than using your ears.”…“I have special needs but I’m no more or no less special than any other kid in any other school.  I may do things differently, but we all do in our own ways.  So, from the bottom of my heart, have a nice day.  I have found peace.  I hope you do as well.  Thanks for listening.  I love you.”

1 Comment on “INNERview: Mommy, I Wish I Could Tell You [HYH]”