INNERview: Inclusion Begins in the Heart of the Parents 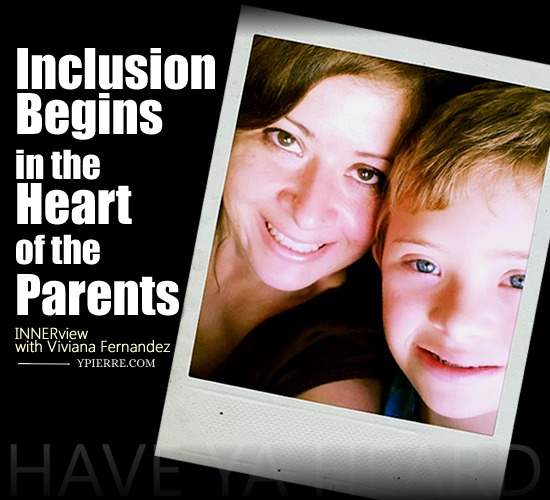 Viviana Fernandez is a multiplatform freelance journalist. For over fifteen years, she was a leading journalist for CNN En Español. In 2008, she received an Honorable Mention from the CNN Heroes Initiative for her work to better the life of people with Down syndrome.

YVONNE PIERRE:  When was your son, Cameron diagnosed with Down syndrome, before or after birth?

VIVIANA FERNANDEZ:  Cameron was born September 24th, 2001. My pregnancy had been great and since I was not 35 years old yet, the doctor did not recommend an amnio. I am glad that he did not because if I had found out that he had Down syndrome before birth, I would have probably committed the biggest mistake of my life out of fear. Cameron was semi diagnosed right at birth and the news was given by a nurse.  She yelled from across the room as I was still in the birth position and she was trying to get Cameron to cry: “Did you know that your son might have Down syndrome?”

YVONNE:  What was your immediate response?

VIVIANA:  I was in total shock and disbelief.  Was she wrong?  Why was this happening to me? What did I do to deserve this? He will never have a “normal” life, he will never go to college, he will never get married, people will make fun of him, and I even thought: ”I hope that he doesn’t make it, this is not what I wanted or dreamed of.”  Why can’t I just have a “normal” child birth experience with a child who does not have Down syndrome?  I also felt no connection with him because I did not get to hold him. Right after birth, he was taken to the NICU and what I got a few hours later was a Polaroid picture of my newborn.  Yes, a Polaroid picture that the NICU nurses sent to my room.

I kept recalling horrible stories of what people in many parts of the world still call “mongoloids” or even worse, the “r” word.

YVONNE:  How has your outlook on his diagnoses changed over the years?

VIVIANA:  It changed who I am as a person. I do not think that I was a bad person before, but having Cameron in my life has made me better all around. First of all, it made me face fears and prejudice that up until I had him, I did not know that I held inside of me.

I learned that we have to take the time to know and appreciate everyone just as they are. I learned that every single person, EVERY SINGLE person has a purpose for being in this world and each person here is a miracle from God. I learned to slow down and appreciate little things.  I was “covering the world” as a journalist, but I had been missing out in the most important things to cover in my life. Cameron certainly made me “cover them” one by one through time. I remember clearly the day that I felt my first spiritual connection with him. I had brought him home with oxygen and I was laying him down in bed. He was staring in my eyes with such depth like saying: “What are you worried about?” Everything shifted inside of me after that day. I stopped crying for what it had not been and started to get to know him and started to get to know who he was and could be for him. Soon, I realized that “what could” be for him relied on how high my expectations were for him. I soon realized that the diagnosis did not define who he is or what he can accomplish in his life or how happy he could be in his life.

I think that I was always a “fighter” in life and very perseverant.   I never really thought that I could not accomplish anything that I set out to do in my life.  Suddenly, that same line of feeling and thinking was transferred to what I wished and hoped for Cameron.

YVONNE:  What inspired you to become an advocate and how do you advocate?

VIVIANA:  Cameron and the transformation that he brought to my life inspired me first of all to be his advocate and then to become everyone else’s.  I want others to see and feel the value of people with Down syndrome and other disabilities and the value of each individual in this world. I firmly believe that each person deserves to have the very best opportunities in life. It all begins with the parents and those who surround the child. I felt that I could use my journalistic skills to bring awareness, educate, inspire and so much more. I started seeing how “all the dots” were connecting in my life. Also, my cousin in Spain was an inspiration. He is the president of the Down Syndrome Association of Santiago de Compostela, in Spain. While I was four months pregnant I took my mother to Spain. It was her dream to see where her father was born and meet that side of the family. My cousin Juan, who also happens to be a journalist, also has a son with Down syndrome. Five months later, Cameron was born. Juan and his family also turned out to be a big inspiration and source of support and love.

YVONNE:  Share with us why you believe inclusion is important for the special needs community?

VIVIANA:  Well, I think that inclusion always begins in the heart of the parents. The child will be “included” as much as our hearts “include” him or her. There are no limitations for our children as to how much they can be included. We set the example for society as parents in spite of the many hurdles that we will encounter along the way. There should never be a time when we have to decided that our kids should be included a “little less”.

For example, the law says that children with disabilities should be placed in the “least restrictive environment possible” within the classroom settings. However, so much potential is lost because not every school system around the country is truly fighting in the best interest of the child. Budgetary issues, pre-historic ways of thinking about people with disabilities (you know, that same prejudice that I had to deal with until I had Cameron) is still very much alive and it hurts our children.  In the end, it also hurts our society because if we do not offer the very best from the beginning, the less independent that our children will become of governmental resources as adults.

YVONNE:  What advice would you like to give to a parent of a child with special needs who might be struggling with accepting their child’s diagnoses?

VIVIANA:  I always think about this:  Let’s say that Cameron had not been born with a disability. It is very likely that at some point in his life he would have been diagnosed with some sort of condition or illness. Would I love him less because let’s say at 3 years old all of the sudden I found out that the he had Autism? The answer is no. Get to know and love him/her for who he or she is. Accept your child’s individuality and celebrate it.

YVONNE:  Over the years since you’ve had your son, how has your outlook on life changed?

VIVIANA:  I appreciate the very essence of life more and I feel very proud and grateful for having had Cameron. He introduced me to the “real world” and to people and place that I would have never gotten to know otherwise. My life is so much richer because he is here.

YVONNE:  What would you like to see change within the special needs community?

YVONNE:  What inspires you and gives you hope for the special needs community?

VIVIANA:  First of all Cameron, and also the love and dedication of so many people who perhaps don’t even have a child with a disability but dedicate their best to our children. I am a board member of the National Down Syndrome Congress (www.ndsccenter.org) and I get to experience so many life changing experiences every year through and at the convention that we hold. We have been able to achieve so much from the goals that we have set through the years!  I have seen so many lives changed for the better because of the NDSC!  I feel so fortunate to have been part of and to experience so many stories of “hope” through the NDSC.  Those stories include the fact that now we have minorities actively represented within the board and the organization.  This has attracted more minority families to our convention which in turn go home and make a difference within their own communities by spreading what they learned or experienced at the NDSC.

YVONNE:  What do you see through your son that you wish others could see?

VIVIANA:  Infinite love and potential.  A human being who has so much to contribute to this world!

YVONNE:  What do you believe changed within you that wouldn’t have if it had not been for your son?

VIVIANA:  I am very fortunate to have experienced true unconditional love.

YVONNE:  Before we go, are there any closing remarks?

VIVIANA:  I think that in our fast paced lives and tech oriented society we are really losing touch with what are the most important things to cultivate and appreciate in life.  We are living in a society where almost everything is disposable, including human lives. As I witness Cameron perseverance to achieve each milestone, as well as how much joy he brings to so many people…

I cannot help to wonder how much we would all gain as a society if we had less fear; we made more time to really get to know one other as individuals not judged by our disabilities or skin color, if we had more tolerance and acceptance in our hearts and minds! We would find out how much more we have in common as humans and how little time we have on this earth to experience it. Nobody should miss out on it!