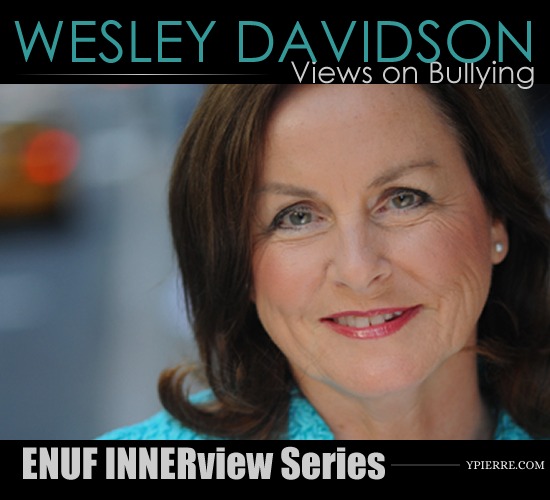 One (1) out of three (3) children is bullied each year. Children with disabilities are at a higher risk of being bullied than their peers.  ENUF (Ending Negativity to Unify Families) is an anti-bullying online campaign that will encourage families to empower themselves and their children.   On behalf of the ENUF campaign, the following interview is part of the ENUF INNERview Series here on HYH Online.   For more information about the ENUF campaign visit us on Facebook at Facebook.com/esilentvoice

Our guest, Wesley Davidson is a freelance journalist that writes on parenting topics.  Wesley is concentrating her writing efforts now on helping straight parents better understand their gay children.  To this end, she writes a blog (http://straightparentgaykid.blogspot.com) that contains posts about bullying, a concern for both parents and its victims.  She is writing an advice book, co-authored with a psychiatrist who happens to be gay, for straight parents of gay and lesbian children.  This book will contain a resource section that includes organizations and websites that combat bullying.

YVONNE PIERRE: As freelance journalist, you’ve written about anti-bullying as well as talked about bullying in your book.  Where does your passion stem from in reference to bullying?

WESLEY DAVIDSON:  My interest in this subject stems from being the mother of a gay son, now age 29, who was bullied as a teen.  His story is not unusual.  I am concerned that 33% of all teen suicides are LGBT persons who have been bullied by other children.

YVONNE:  What are some of the backlashes you’ve seen from someone being bullied?

WESLEY:  From my own experience, I watched my son being bullied as a freshman in high school.  Although there was a Gay-Straight Alliance at his school, he was bullied nevertheless. His teachers did not come to his aid, so he started skipping class, eventually dropping out altogether for a semester.  According to GlSEN (Gay, Lesbian, Straight Education Network) that surveyed teens, bullied LGBT kids skip school at least one day a month.

YVONNE:  Bullying is often seen as “horse playing or “joking” but how does bullying impact our children?

WESLEY:  Bullying is NOT teasing. It’s harmful aggression.  Adopted by psychologists, the definition is physical or verbal abuse repeated over time and involving a powerful imbalance (the bully is the “dominant” one and the victim is the “weak” one).  Bullying impacts a person’s self-esteem.  With cyberbullying, bullying isn’t left at the playground, locker room, bathroom or school hallway. It follows the child everywhere. It persists online through texting and can go viral; potentially reaching millions for further humiliation. Author Ritch Savin-Williams, Professor of Clinical and Developmental Psychology at Cornell University, states that LGBT kids are bullied less once they turn eighteen, in other words, after they graduate from high school.

YVONNE:  From your perspective, what needs to be done to better protect our children from bullying in school, home and in our communities?

– There still exist untrained principals and teachers who do not report or stop bullying. Sometimes, the teacher can be the bully. If an adult doesn’t get involved, the bully continues. Innocent witnesses should get involved and report bullying to authorities.

– Bullies should be punished and their parents notified.

– As cafeterias, playgrounds, bathrooms, locker rooms are common places for bullying, they should be monitored.

– Find out what is going on at your school to combat bullying.  Talk to the teachers, guidance counselors, principal, and if you don’t get satisfaction, the Superintendant of your school district.

– Not all states have safe school laws.  Inclusive curricula should help students understand and respect differences.

– Communities should be supplementing the anti-bullying programs in the schools.  For example, libraries could have speakers who were formally bullied talk about the long-term effects of bullying.

– Police could talk about the laws in place regarding bullying in their state. Only seven states have laws that specifically protect GLBT students from bullying based on sexual orientation or gender identity.

– Church Sunday Schools could have anti-bullying messages that would underline the concept that God loves all.

– Mental health experts could address the psyche of the bully and how to resolve conflict with him.

– Develop a strategy to rehearse with your child so that if a bully attacks him, your child will know what to do.

– Parents could partner with the P.T.A. to implement school programs aimed at respecting diversity.

– Parents need to instill in their children that if you need help, it’s not tattling to report a bully.

– Watch what you say at home about those who are different.  Kids pick up on your attitude and can parrot you outside the home.

– Monitor your child’s computer and/or cell phone for cyberbullying. Cancel social networking, e-mail and cell phones if an issue persists.  Contact the school administration and/or police.

YVONNE:  Ideally, what would you like to see change?

WESLEY:  State laws need to be uniform. Emily Brazelton, author of Sticks and Stones: Defeating the Culture of Bullying and Rediscovering the Power of Character and Empathy (Random House, 2013), points out that state laws don’t help.  Definitions of bullying in state legislations vary, causing confusion for teachers and parents. Kids need to know the difference between bullying and teasing.  “Bullying is different from drama,” remarks Brazelton.  “Drama is ‘social interaction that’s short-lived and characterized by overreaction, exaggeration, prolongation, involvement of extraneous people and inflated relevance’. ”

YVONNE:  What Advice and tips would you like to give in respects to bullying?

WESLEY:  Bullying is so widespread.  According to Bully, the documentary by Lee Hirsch, 13 million American kids will be bullied this year.  Almost 30% of young people participate in bullying behaviors or are bullying victims. The victims are 2 or 3 times more likely to commit suicide.

Know your rights.  Be informed.

YVONNE:  How can people get in touch with you?

WESLEY:  People can get in touch with me through e-mail: wcdwrite@aol.com, Twitter: @wcdwrite, or Facebook:  wesleycullendavidson, professional writer.

YVONNE:  Before we go, are there any closing remarks?

WESLEY:  In closing, tune into your child’s emotional state.  If you suspect he or she is being bullied, watch for signs of depression and seek therapy for your child.