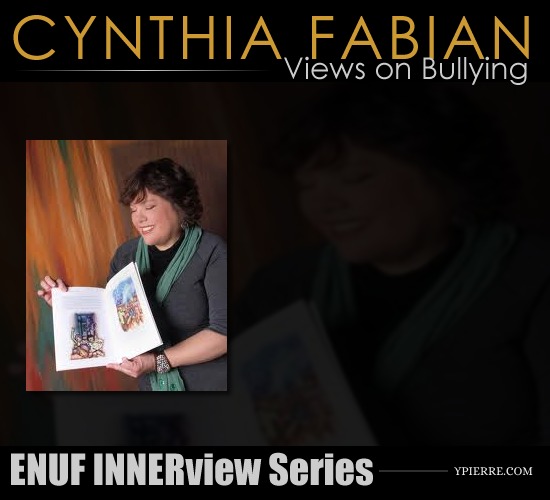 One (1) out of three (3) children is bullied each year. Children with disabilities are at a higher risk of being bullied than their peers.  ENUF (Ending Negativity to Unify Families) is an anti-bullying online campaign that will encourage families to empower themselves and their children.   On behalf of the ENUF campaign, the following interview is part of the ENUF INNERview Series here on HYH Online.   For more information about the ENUF campaign visit us on Facebook at Facebook.com/esilentvoice

Previously a teacher, Cynthia Fabian now speaks in libraries and schools.  “I have had epilepsy my entire life and have always had to overcome obstacles in many ways. This book is more about making yourself the best, by keeping a positive attitude than anything else.” She lives in Somerset, N.J., and is writing her next book, Can’t and Able, using star metaphors.

Illustrator Bio: Daniel Stevens has a B.A. in Industrial Design from the Pratt Institute. His experience ranges from designing clothing and furniture to creating children’s illustrations. He has also worked for Disney and MTV, and is the artist for Second Hand Art, the author’s previous book about recycled art.

CYNTHIA FABIAN:  According to Wickipedia: Bullying may be defined as the activity of repeated, aggressive behavior intended to hurt another person, physically or mentally.  School bullying – Workplace bullying – Cyberbullying – Relational aggression

YVONNE:  What are the different forms of bullying?

CYNTHIA:  There is school bullying, the most common form, which can be as simple having an unwanted action repeated periodically.  Then there is workplace bullying, a manipulative action, sexual discrimination or other repeated action of harassment. Cyberbullying, can take place with unwanted texts revealing private information to others, information can be sold or freely downloaded to different venues. It uses humiliation, a very powerful force to manipulate another person.

CYNTHIA:  There is no shelter large enough to protect them from the ignorance of society.  Teach them to have a harder shell when people say things that are not appropriate.  It is easy to hate, but so much more difficult to realize the personal ignorance that is inherently human.  Once, however, you do realize this and forgive ignorance a child of any age can help to make changes of tolerance for others.

YVONNE:  Once a parent is in a situation where their child has been bullied what can they do?

CYNTHIA:  There is an inner aggression in us all that preys on the weak.  It is perhaps with the greatest care that I say if you have read William Golding’s Lord of the Flies you will weep for humanity. The aggressor will continually rise and pick on others.  In addition to that, even something as seemingly harmless as teasing is a form of hostility.

YVONNE:  What can parents do differently to help minimize or hopefully eliminate bullying?

CYNTHIA:  Ignoring others who are bully’s is the first step, reaching out to a school personnel individual can often be the only help a child may get.  This may or may not make things worse, as the child may get teased for getting the other child in trouble.   My school had a zero tolerance rule when it came to bullying.  Each teacher maintained this code and was vigilant and it worked.  With everyone looking out for bullying and listening for this type of behavior, it was controlled.

YVONNE:  What are some tips on how parents should look out for in reference to bullying?

CYNTHIA:  There used to be one bully on the block, who would steal milk money, the problem has a much wider scope now.  Keep the lines of communications open with your kids.  Try to have dialogue before bedtime or if you can at mealtime.  Make this time special reviewing what happened during the day.  Never accept, “nothing” as the answer to what happened today at school.

Kids are the masters of hiding things and trying to solve major issues.  They do not even think completely rationally until the age of 21.  So, they may view a problem as something they can deal with, but that is troublesome on many levels.

YVONNE:  What encouraging words would you like to leave with parents?

CYNTHIA:  Be watchful, but don’t pull your child out of school.  Putting your child in a cocoon does not help anything; they will grow up sheltered and believe they are the center of attention.  It is more positive to simply deal with how the child reacts to conflict.  Measures that can be taken can be taught at home, in school or on the Internet with such organizations as: Stop Bullying, etc.  There are many venues for this, simply go on Facebook and type in those key words, your child can join and learn to control bullying.

Bullying can be fought, for one thing these aggressive video games the children view is affecting their minds, have any parents ever watched these violent games the kids play?  Where is Scrabble when you need it?

YVONNE:  Ideally what would you like to see changed?

CYNTHIA:  Schools often do not report small incidences of bullying because they do not want a negative impact to be conveyed upon their school.  It is a little known secret, so you think that they are reporting it, but often protecting themselves instead.  It is much better to see the dean of students or other person involved in student behavior.  It is important to know the principal is busy and has an agenda to protect the school’s reputation.  You are not there to make friends with the person, call the local media if you do not get help, no one is helpless to a bully.

YVONNE:  How can people get in touch with you?