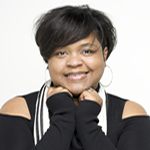 As a survivor of childhood sexual abuse, rape and the murder of her father as a small child, Yvonne Pierre continues to use her gifts to bring about positive change. Yvonne is a proud wife and loving mother of two sons. Her youngest was diagnosed with Down syndrome (Ds) after birth, which ignited her passion
for using her voice to make a difference.
Yvonne’s journey of advocating positive awareness for Down syndrome began in 2004 when she launched “Have Ya Heard,” an online community that evolved into the “HYH Rise Awards” in 2011. The awards were an online event celebrating and honoring those who are making a difference in the Ds community. Her mission is to show the positive side of having a child with special needs. In 2007, she produced and hosted over 100 episodes of her own syndicated talk show “The Yvonne Pierre Show.” In 2010, Yvonne wrote an inspirational memoir “The Day My Soul Cried.” With the launch of Y Pierre Productions, Yvonne wrote, produced and directed a stage play called “Then You Stand,” in 2012. That same year, Yvonne wrote an award-winning short film called, “Never Alone.” In 2014, she executive produced “The 2014 Rise Awards” held in Decatur, GA. In 2015, Yvonne wrote a critically-acclaimed musical dramedy

stage play called, “It Takes Two.” In 2016, she wrote a novelette “Zoey” and executive produced “The 2016 Rise Awards” online.  She is currently working on a web series called “Perfect” due to launch in 2019.

Yvonne holds several degrees including her MBA received in 2010 and her MA in Creative Writing received in 2017.
Yvonne Pierre is a wife, mother, writer, producer, advocate, and survivor.  “Life is so much bigger than the eyes can see and the heart can feel.”  Yvonne’s passion and purpose are to use the power of storytelling to give hope and provide a different perspective on life.
Connect with Yvonne on:
Facebook.com/writervonypierre
Twitter.com/ypierre
Instagram.com/yvonne.pierre
FB Group for loved ones of individuals with Down syndrome:
Facebook.com/groups/hyhonline